Most people are familiar with the Rashomon effect either by that particular term or as the old statement about there being three sides to every story, yours, mine, and the truth. In Akira Kurosawa's Rashomon movie, he attempted to illustrate this concept in his own inimitable way. Personally, I think some "truths" are too big to be known or understood by any one person and that such truths are like infinity. That is, you can approach, but never reach them.

Knowing any entire country's culture would be one of those vast truths that can never be known through the filter of any one individual. Even researchers who do their level best to distill facts are not presenting "the truth", but rather "a truth". In order to scientifically discover truth, you have to alter it, minimize mitigating factors, and certainly ignore huge swaths of potential candidates who can provide alternative but equally valid data in order to keep the sample size down. The truth is bigger than any one measure of it.

If you want to understand Japan, it's not enough to live here. It's not enough to see it with your own eyes and process experiences with your single mind. If you want to move closer to the truth, you have to look at it through the eyes of as many others as possible. Some eyes are more discerning than others and some hearts and souls more perceptive. What is better is that some word masters are more articulate and entertaining about how they share their experiences. To that end, I have been following the Loco in Yokohama blog for quite some time. 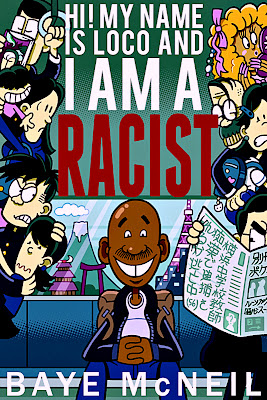 You can learn more about buying a copy of Baye McNeil's first book here.

Loco, who is Baye McNeil in real life, is unique among Japan bloggers for a variety of reasons. First of all, he is African American in an arena that seems to be dominated by white boys and mommy bloggers (not that there's anything wrong with either of those types of bloggers as they have a relevant truth to share as well!). That means that his experiences are going to be different based on the fact that his physical presence elicits different responses from the natives than many other bloggers are receiving. Second, he comes from a pretty hard background which makes his perspective rather unique. The context through which he views life here is just as honest and real as that of folks like me who grew up in rural farming communities or as those who grew up in urban areas or grew up affluent. Finally, and most importantly, he's a writer.

When I say he's "a writer", I don't mean that he simply strings together words and sentences to provide information. I mean he holds your attention and entertains you. He elicits emotions and displays his own passion. People who can wield words with skill and energy are rare. Fortunately for us, Baye has used his skills as a word craftsmen to produce his first book, and I am encouraging my readers to read it. You can read it because you are interested in Japan. You can read it because you want another perspective on the truth about this country. Or, you can read it because you enjoy great writing. That'll be my reason.
Posted by Orchid64 at 6:59 PM