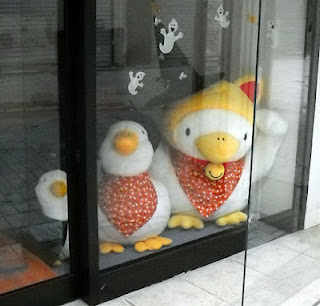 Not one, not two, but 3 variants on the duck, and they're all decked out for Halloween!

In the U.S., the AFLAC duck mascot is shown as a real duck. This makes sense since insurance is serious business, well, except for the part where ducks aren't exactly representative of maturity and responsibility. In Japan, the duck gets the same makeover as everything else. It is "cutified" and most of the AFLAC storefronts that I saw included an enormous and utterly adorable stuffed toy version of said duck.

Seeing it there made the whole sense that buying insurance was this adult thing which addressed the need to be secure in cases of death or destruction a little less daunting, and I miss the way that this soft toy softened the feeling associated with something like insurance.
Posted by Orchid64 at 8:00 AM