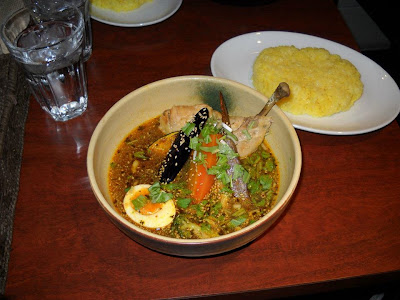 Delicious Dominica soup curry with many well-prepared vegetables including a tasty bit of burdock.

"Gobo" means "burdock" in Japanese. Before coming here, burdock was something that I had to pick off my clothes after a childhood romp through the field behind my rural home. It was certainly not something that was included in a delicious salad that could be purchased in nearly every deli and convenience store. Back when I first arrived in Japan, burdock salad (kinpira) with it's crunchy texture and lovely sesame flavoring was one of those things I instantly took to despite a very squeamish and decidedly picky palate.

I love burdock and am always delighted to find it in a dish in Japan. Given that it is considered slightly risky (as it is part of the poisonous nightshade family, as are tomatoes) to eat if not handled properly, I imagine it's not likely to catch on in the U.S., so I'll miss being able to eat it.
Posted by Orchid64 at 8:00 AM