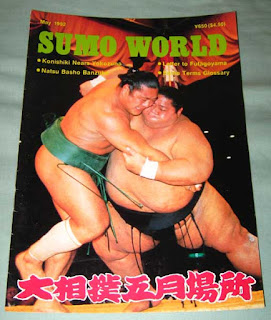 Image from "sumo forum". This was an issue we almost certainly once owned. It shows Kirishima fighting Konishiki.

I have always felt that people approach cultural experiences backwards. They go to Japan, watch kabuki, attend a tea ceremony, climb Mt. Fuji, or attend a sumo match. These things are done without any real understanding of the events that one is witnessing or taking part in. The complexities tend to pass the participant by and they only gain the most superficial of value from the experience.

While I would never suggest that one should be an expert before taking part in a cultural enterprise, I would say that it's not a bad idea to get a pretty good handle on what is going on before paying a lot of money or going to a lot of trouble to see or do something. I wouldn't fly to Japan on vacation and watch kabuki cold, as Dave Barry did when he formed the basis of his book, "Dave Barry Does Japan." As he wrote about it, it was a lot of "shrieking" and "mincing". I'm sure that it does entail both of these things, but I'm also sure that the types of movements are done for a reason. Since I never was drawn to kabuki theater, despite my many years as a KISS fan and being exposed to guys who wore similar make-up in their performances, so I don't know what the deeper meaning is. I do know, however, that knowing what you're watching transforms an experience into something better and more engrossing.

To that end, I want to talk about my memories of being a fan of sumo. If you don't know what's going on, it's just a couple of fat or chubby guys in fashionable diapers pimp- or bitch-slapping each other around a raised clump of clay until one of them falls over. The seconds of actual action are preceded, in the eyes of the uneducated, by a long, tedious phase of prowling the ring, stopping to crouch and stare occasionally and huck salt into the ring. That's the sum total of the experience unless you understand the culture of sumo.

Before I ever saw sumo live, I watched bits of it on occasion on the "Sumo Digest". Live sumo spans an entire day and hundreds of bouts played by men whose ranks start at rock bottom and work their way to the top, to the "grand champion", or "yokozuna". The "Sumo Digest", which used to be one of the few bilingual programs on Japanese T.V., compressed the day's major bouts into about a half hour of programming so that businessmen who liked the sport but couldn't sit around for the hours it aired on NHK (Japan's public television network). The long-form airing was for the old men who had retired. The shorter one catered to those who worked and wanted to skip the preparatory casing of the dojo (ring) and psyching out with stares.

After watching bits and pieces of the "Sumo Digest" after a day of slaving away at Nova conversation school, I started to figure out what was going on. Why was some guy in an elaborate headpiece and kimono holding a fan and yelling next to them? Why did it take forever to get started on a match that was over so fast in most cases? What was put on top of the fan at the end of some bouts and grabbed by the winner before he left the ring? Why are they wearing such undignified attire? How is it that enormous guys sometimes lose to little guys, but always seem to defeat strong, bigger wrestlers?

Watching sumo little by little didn't answer these questions. What it did was give me enough experience with it to think about asking them. Seeing sumo again and again took it from the superficial observation that this was a sport in which "two fat guys were shoving each other around" to something with details and nuances. I just didn't understand them. I imagine this is the same way that someone who has a cursory experience with tea ceremony is aware that tea is being stirred, but they don't notice how it's being stirred or why it's being stirred in a particular manner (it's to reduce foam).

Once I had enough sumo viewing from T.V. under my belt to think to ask such questions, I had to find a way to answer them. During my embryonic stages as a sumo fan, from 1989-1991, there was no internet as we know it and very little in the way of English language information on it. What little there was tended to be very cursory and offered with an eye toward giving English speakers just enough education to not go rushing up the the dojo and give the wrestlers bear hugs. Just in case you may think they look like big, sweaty, nearly naked teddy bears and are inclined to rush them for a cuddle, that's a big "no-no", especially if you're a woman.

Fortunately, there was one bastion of sumo information out there in the form of an English language magazine called "Sumo World". This print publication came out six times a year, one issue before every tournament, and provided English-language sumo enthusiasts with a conduit to the inner workings of sumo. If you couldn't catch the names of the wrestlers because the referee called them out in such a sing-song manner that they were incredibly distorted to the untrained foreigner ear, the magazine provided you with a clearer pronunciation.

There was also a bit of history, some insider tidbits, and a focus on various aspects of the sport that the Japanese could access easily, but English speakers could not. One of the features in each issue focused on one of the 70 "winning moves". It spoon-fed the neophytes the details which taught us that they weren't merely slapping, shoving, and pushing each other around. There was a method to the madness. In fact, there were a great many methods, but you couldn't see them unless you knew enough to look and, with bouts lasting mere seconds in many cases, you'd have to have a keen eye to distinguish the grip one guy had on the others belt before he got hucked over the edge.

Early on in our stay, one of our great pleasures was finding the new "Sumo World" magazine at Kinokuniya book store (one of the few places that carried English language magazines). It became part of our regular routine to pick up an issue as soon as it was released. Little did we know that it would also be the conduit through which we'd access our first live experience with sumo (to be continued next week).
Posted by Orchid64 at 8:00 AM