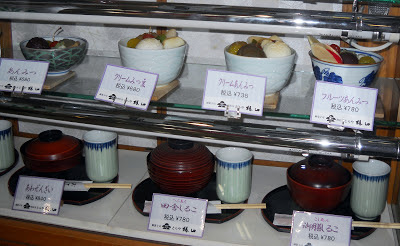 I didn't realize it until I returned, but people in the U.S. think it's really freakish to take pictures of your food when you're at a restaurant. In Japan, it's practically a sport. Many people use their cell phones or cameras to catalog what they're eating and then post the picture on social media sites. It's not only considered socially acceptable by your cohorts, but also by the restaurant staff. They realize that it's actually a form of promotion of their business because a Facebook status or Tweet that shows the food might lure customers to them. Of course, food is usually pretty appealing in appearance in Japan so few have anything to fear.

In America, restaurants sometimes actually tell you that you can't take pictures of their food and will get upset if you do so. They think you're trying to mock their slop online. Other Americans simply think you're strange.

I liked taking pictures of my food in Japan and am glad to have recorded what I ate. It has not been unusual for me to look back through Facebook albums to locate a restaurant based on my pictures and descriptions so I could go there again or recommend that place to others. I miss the way it was socially acceptable to take pictures of your food in Japan.
Posted by Orchid64 at 8:00 AM