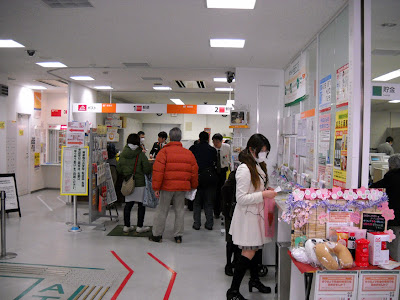 Notice that there's a postal worker (in the right, wearing a tie, and white shirt) helping people in the line as well as several at the counters.

I made more than my share of trips to various post offices in my life, more so than many folks due to my carrying on a long distance relationship in pre-internet days from the U.S. and conducted a mail order service for collectible records from Japan. Since coming back, I have been reminded of the level of indifference that American postal workers often exercise while doing their jobs. The lines are slow and the workers couldn't be bothered to offer a little warmth or humanity while they weigh and stamp your packages.

That's not to say that Japanese postal workers were a bundle of kindness and humanity. It was actually far from it. They were generally the perfect picture of efficiency and professionalism. Here, the postal service itself runs quite well and the postal carriers are very nice, but the people in the post offices tend to be very sluggish, lines move slowly, and service is indifferent. Both will get your packages and letters there, but I felt like the ones I experienced in Japan were generally approached by people who took their job seriously and handled customers more carefully and with an eye toward good service.

I continue to miss the level of service and the attitude portrayed by postal workers who I encountered in Japan.
Posted by Orchid64 at 8:00 AM