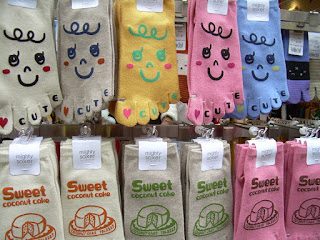 Perhaps this is my imagination, or I don't frequent nice enough stores in the U.S., but I see a lot of profoundly ugly clothes in America. In fact, in some stores, the styles and types of designs that I see are almost painful to look at. Even the strange T-shirts in Japan didn't look as stupid as the T-shirts here. They're full of the sort of contrived "jokes" and sayings which are far less clever than the writer seems to believe they are. I'm talking about shirts which say, "pobody's nerfect," or "think ahea..." with the "d" not fitting on the line and being crammed off to the side. The designs are also ugly as hell most of the time compared to those I saw in Japan.

It seems that the Japanese aesthetic influenced even their cheap clothes in this regard and kept designs that might be cheesy out of public view most of the time. That's not to say that there were never any tacky clothes, but it was always my sense that those were intentionally tacky. I really miss the clothing designs in Japan.
Posted by Orchid64 at 8:00 AM

Email ThisBlogThis!Share to TwitterShare to FacebookShare to Pinterest
Labels: clothes, fashion, will miss