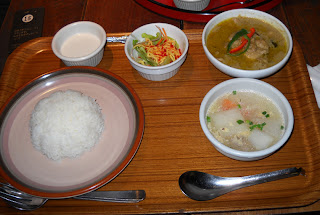 A Thai meal "set" in Tokyo. See that little blob of chicken in the middle of my curry? See that enormous mound of rice? Discuss.

My husband and I have been back since the end of March 2012 and, oddly, we bought our first chain-made pizza yesterday. It was from Pizza Hut, and, coincidentally, that was the chain we patronized most in Japan. That means I have copious amounts of experience with pizza from said maker there. We bought a one-topping (pepperoni) pizza and were shocked to lift the lid on it and find that it was wall to wall with slices of said cured meat-stuff. Both of us remarked that we would never see that much meat on a pizza in Japan.

Ironically, that was the second time in as many days that we had an "American meat experience". We also attended a Portuguese cultural festival (because that's what you do when you're one of us) and got a pork dish from them which had half as much rice as pork. We both noted that such proportions would have been reversed in Japan.

I am not an enormous meat eater, but the carb to protein ratios in Japan when you went to restaurants were often insane. Here, there may be too much meat, but for a couple that has a strong inclination to split their entrees when eating out, this just means the whole experience costs that much less. I don't miss the puny meat portions in Japan.
Posted by Orchid64 at 8:00 AM