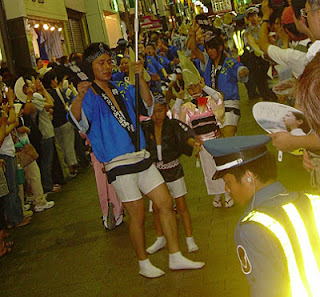 These type, super thin shorts have replaced fundoshi for many modern participants in festivals, and the audience members are grateful.

Fundoshi are the thongs that men sometimes wear in rituals or festivals in Japan. They amount to a thong made from twisted cloth. They tend to be worn by men who have been around the track a few times and are closer to retirement age than university graduation age. Need I really say more about why this is something I won't particularly miss?

Well, actually, I should say more because, as someone who saw her share of robust, hairy, and even spotty behinds as a sumo fan, you'd think I'd be less squeamish about this. However, sumo is a context in which I'm comfortable seeing men in thongs. Public places and normal people wearing them is not one of those contexts. My first experience with seeing this public exposure was watching men in the summer hauling a mikoshi down the street. It dampened my ardor for further such festivities. Fortunately, future mikoshi hauling was done with less revealing attire, at least as far as I saw.

Incidentally, what sumo wrestlers wear is called a mawashi and is made of silk.
Posted by Orchid64 at 8:00 AM