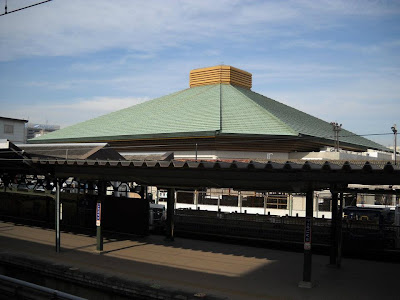 The Kokugikan, or "national stadium", located in Ryogoku, Tokyo.

This is a continuation of last week's post about random memories.

One of the things about being new to a place, any place, including a new city in your home country, is that you don't know the ropes. Before information became something anyone could access via a Google search, it could take years to learn what was possible, if you ever learned at all. In the absence of a central database of information and in the presence of a language we could not read or speak particularly well, we relied on word of mouth in our early days in Japan.

When it came to seeing sumo live, the words coming from the mouths of everyone we spoke to was that it was insanely expensive. This was back in the days of the last great yokozuna, Chiyonofuji. Sumo at that time was probably just as corrupt as it is now, but it wasn't public knowledge, at least not to the extent that it is now. It was also before there were any foreign grand champions (yokozuna) and the only well-known foreign wrestler was Hawaiian behemoth, Konishiki.

At that point, foreigners were not a threat to Japanese domination of their national sport as they are now. They were simply novelties to construct rivalries around in order to add color and a more competitive spirit to the game. Seeing Konishiki lose was an affirmation of Japanese superiority at their own game. Seeing him win was seeing an underdog triumph. It was all good back then, except if you were Konishiki and being denied a promotion to "grand champion" that you debatably deserved because the fans simply could not bear granting the status of "yokozuna" on a gaijin (foreigner).

Because the balance of power was favorable, and the wrestlers appeared to have integrity and skill, sumo was immensely popular in the late 80s and early 90s. That meant demand for the box seats that were close to the ring was high and prices were in a range only successful executives and indulgent small company owners could afford. These seats, called "masu-seki" in Japanese, were going for around 500,000 yen apiece. At modern exchange rates, that's $5,000 for a box that seated 2-4 people depending on the "box" size, and more importantly, the patron size. You might cram 4 tiny, shrunken grannies in one of some of them, but I wouldn't bet on it.

For the privilege of occupying these spots closest to the ring, you sat on a thin cushion and were served tea and snacks for "free" as well as received a bag full of souvenir goodies. The cushion came in handy when a bout ended in a particularly gratifying way, such as when Konishiki lost to a Japanese wrestler. You could huck the "zabuton" at the ring to show your approval of the result. Of course, then your bony ass would be sitting on the hard ground, but a pillow about as thick as a matzo wasn't going to be providing much comfort anyway.

Since even most of the Japanese folks around us had no experience actually seeing sumo outside of their viewing of it on the idiot box, they always told us it was too monstrously expensive to contemplate going, ever. Seemingly miraculously, Andy Adams, the editor and publisher of the English language sumo magazine, Sumo World, started to offer up his press box tickets on select days. He was obliged to buy the box for 32,000 yen for every single day of a 15-day tournament, and he didn't want to go all of the time.

Considering that we thought the alternative was to pay 500,000 yen, we lept at the chance to buy the box for this "bargain" price and arranged to go on one of the weekdays that we, as teachers, were not working, and that, he, as a journalist who was getting perhaps a little bored with seeing so often and sick of having empty his wallet, did not care about. For him, what really mattered was the first day and the last day. I'm guessing he sold the popular weekend days to buddies at the press club. The "dregs", weekdays during which the more affluent set among foreign folks in Japan were working like normal people, were offered to readers for purchase.

Remember what I said about not knowing how to navigate a new environment and not having the magic of the internet to assist? Later, we were to find that all of the word of mouth we'd heard about outrageous ticket prices wasn't exactly the whole truth of the matter. While tickets were in incredibly high demand, the people who ran the Kokugikan, the national stadium in Tokyo at which three of the year's six tournaments were held, kept back a certain number of the "worst" seat tickets to sell on the day of the match. I'm sure this move was done to ensure at least some access for the less advantaged in the population, because they absolutely could have sold them for higher prices as pre-sale tickets during sumo's heyday.

These "general admission" tickets could be purchased at the office of the stadium and the number, which my husband and I used to know exactly but is lost in the cobwebby recesses of my mind, was around 250-300, I believe. If you got up super early and stood in a long line for two or three hours, you could buy these tickets for 2100 yen (about $21). It wasn't until we learned more about how things worked and a bit more Japanese that we found out that this option existed. Granted, it cost you hours standing in a line and the stress of worrying that, somehow, they'd sell out before you got up to the office, but it was certainly a more economical option. 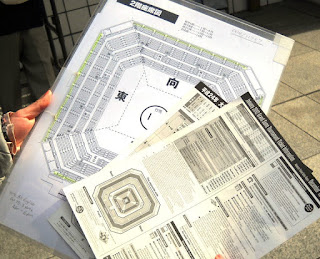 A seating plan and information about the stadium in both Japanese and English. This picture was taken in 2012 when we walked by the Kokugikan and a woman out front was offering to help foreigners buy tickets. Sumo is far less popular now, and much more international. Such service and information in English was not available in the late 80s and throughout the 90s.

In later years, my husband and I would get up at 6:00 am, rush out the door to catch the earliest train to Ryogoku and hustle from the station to the line that had already formed. During the popular years, we tended to hit near the 200th spot in line. I recall that I'd stand and hold our place while he'd leave the line and count the number of people in front of us. If we were close to the cut-off point, we'd fret about wasting our time and not getting tickets, but I don't believe that ever actually happened.

We'd happily get the tickets when the office opened at 8:30 or 9:00 am and then wander around Ryogoku until the first matches with the greenhorn wrestlers started. We'd sleepily hang around, sometimes trying and failing to get in a nap in our uncomfortable cheap-theater-style seats, until the big boys came out to play. During these times, we'd spend about 6 hours inside the stadium with only about 2 hours of "important" action to watch. From 4:00-6:00 was when the highest ranked players did their thing, with the final hour being the one most people really came to see.

Going for the general admission tickets over the press box ones saved us money, though at the expense of sleep and time, but it also had a particular advantage. We spent hours and hours in the Kokugikan and came to know its nooks and crannies well. We also watched the lower level players and developed a keener sense of what it was to be "really good at" sumo and what sort of mistakes those who were not yet there in their abilities were making. The full scope and range of what was going on opened up to a far greater extent as a result of those experiences. That was worth a little lost sleep.

In the next and final installment in this little series, I'll be talking about what it was actually like occupying the press box and watching sumo live.
Posted by Orchid64 at 10:14 AM