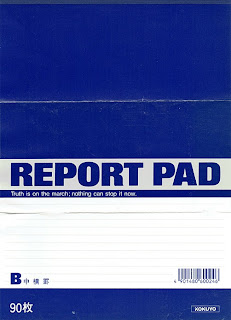 A B5 notepad. I'm more familiar with A3, B4, A4, etc. than I am with things like "letter" size thanks to having done more work in publishing in Japan than in America.

When any discussion about the metric system vs. whatever the hell America uses* comes up, the smug Europeans go on about how superior the former is and talk about how we should change. Let me say right now that it's attitudes like that that keep us using things like "foot", "yard", and "inches" and having to remember that there are twelve inches in a foot, sixteen tablespoons in a cup and I don't know how quatloos are in a bar of latinum. The more superior you come across and the more you look down your nose at Americans, the less you will be heard. That's a shame because there's a good point to be made. The metric system, which I used in Japan and is a better system, is the way to go. It makes everything easier, unless, of course, you have to keep hopping back and forth between the two and have to remember that there are 28 grams in an ounce or 15 ml. in a tablespoon (yes, I had to know these things).

I miss using the metric system, which was easier to understand and measure. So, all of you countries who make this point and are assholes about it, cut it out, please, so that Americans can stop seeing such an important thing as an international pissing contest in which we are fighting over who can pee further in centimeters or inches.

*I know it's often called the "Imperial System", which means we get to blame England, right?
Posted by Orchid64 at 8:00 AM