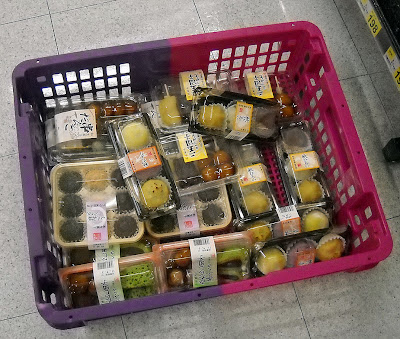 The irony is that a lot of food in Japan is naturally gluten-free due to the "rice culture".

One of my former coworkers asked me what I was doing during the March 11, 2011 earthquake and I told him that I was baking muffins. He said, "I bet you were," in a way which patronizingly said, 'you prairie muffin housewife, you'. When men become chefs of all sorts, they are masters who are perfecting a craft. When women do it at home, they're good little wifeys fulfilling their role and duty. I wanted to let him know how unintentionally condescending he was being, but I'm convinced that people who are lacking in self-awareness cannot have it forced upon them by others. I let it go.

Nonetheless, I do like to cook and bake, and it's not to make my husband happy. It's an exercise in creativity. In fact, some of my most satisfying endeavors are inedible to him with his particular tastes and purely created for me or others. It's one of the reasons that vegetarians are interesting to cook for when we have them to our home as guests. The restrictions that are placed on you force you to think outside the box. And, then, there are the gluten-free types...

Since coming back to the U.S., I've witnessed firsthand the gluten-free fad, and it is a fad. Yes, there are people who have celiac disease and are actually made sick by gluten, but there are also people who just see a bandwagon and are jumping on it. Gluten-free is the carb-free and low-carb of the 2010's. Before that, we had low-fat and fat-free. While I've actually found the challenges of baking gluten-free somewhat interesting, I find all of the labels on products that never had gluten pronouncing their absence of evil wheat protein ridiculous.

I am glad that I was spared this sort of happy nonsense in Japan, and I doubt that they'll ever adopt this particular fad. In fact, the main food fad related to diet that I saw in Japan was about reduced cholesterol products or those with collagen enhancement. I miss the fact that this sort of dietary restriction was rare there, and never in my experience quite so broad as things like gluten-free.
Posted by Orchid64 at 8:00 AM