Will Miss #29 - statues of the Colonel (reflection) 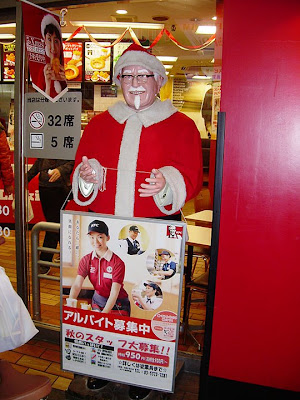 Continuity can be a potent cultural touchstone, and one of the ones that I loved most in Japan were the statues of Colonel Sanders that were place outside of Japanese branches of KFC. I can't say that a reproduction of him graced every outlet, but it was at most of them in Tokyo. The Colonel is even part of local folklore in that there is supposedly a curse associated with a statue of him in the Kansai area.

In Japan, it seemed that these sort of plastic mascots to welcome people were quite common and they put an artificial "face" on the brands. The Colonel, in my experience, was the biggest physically and the one most likely to change costumes regularly in tune with the seasons or the times. He certainly wasn't the only one because I did see the Sato elephant and the Fujiya girl attired according to the times on occasion as well, but he was always the most noticeable. Ronald McDonald also showed up on occasion, usually sitting on a bench so that people could pose with him and have a picture taken, but the Colonel was always my favorite mascot (even though, frankly, I don't like his chicken at all).

I miss seeing those statues of the Colonel, and have noticed that we don't do this same sort of thing much (if at all) here in America. I'm guessing it has to do with vandalism, and that makes me sad.
Posted by Orchid64 at 8:00 AM