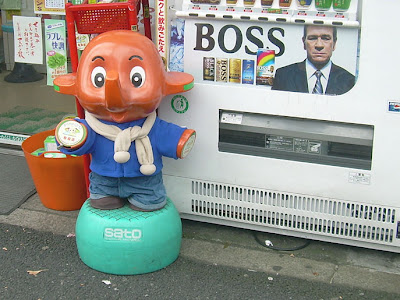 Two Japanese corporate icons greeted me outside of establishments since I first arrived in Japan. One was the Fujiya girl, who vanished when the Fujiya sweets shop went away about a decade ago, and the other is the Sato elephant. Like Colonel Saunders, he gets dressed differently based on the seasons and holidays. Unlike the Colonel, he's a very Japanese icon. There is something about the expression on the little orange elephant that reminds me of old-fashioned animation (think Sazae-san, not Sailor Moon). Frankly, it reminds me of a happy and earnest child.

I'll miss seeing this friendly little elephant statue, which sits in front of no less than 3 shops in my neighborhood.
Posted by Orchid64 at 12:15 AM