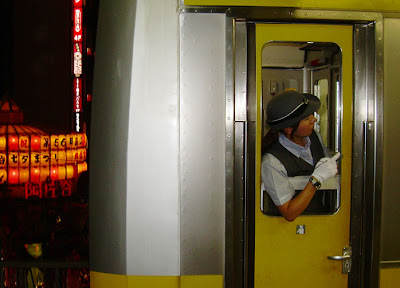 A rare female conductor on the JR line points to signal that all is ready for departure.
People like to say that the situation in Japan has improved a lot for women over the past several decades, but the glass ceiling is still set quite low relative to Western countries. Women are still barred from doing jobs that men have deemed too dangerous, dirty or physically taxing for them. Whether or not women would like to do those jobs isn't the question. They simply have no choice. What is worse than that though is that women are often placed in support positions at companies or not considered as management-level material regardless of their capability to do the job. They are also paid less because there is an assumption that their husbands will support them and that they will quit their jobs after marriage. Occasionally, a woman can become a boss, but it is far more common in female-centric industries or jobs where a woman is primarily the boss of other women and not a cadre of men.

I won't miss how low the glass ceiling is set in Japan, and how it limits and takes advantage of the women I know here.
Posted by Orchid64 at 12:15 AM