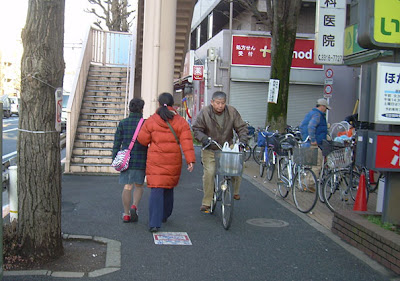 I have problems all the time with people on the sidewalks and dealing with who has the "right of way", and this is an issue in a crowded city with relatively narrow sidewalks. It has always been my impression that people are supposed to ride bikes or travel to the left as that follows the side that cars drive on. In fact, I was once told "hidari" (left) by a bicyclist when I was walking on the right early in my stay in Japan. That being said, if this is an unwritten rule, people ignore it when I'm actually on my left if they are coming at me on their right, but they expect me to follow it if I'm on the right. Generally speaking, it seems as though this is a rule that only applies to whoever wants me to get out of their way no matter where I am or where they are.

I won't miss the people who won't budge when I'm on the left and they're coming at me on their right, nor the ones who insist I must go left when I'm on the right.
Posted by Orchid64 at 12:15 AM