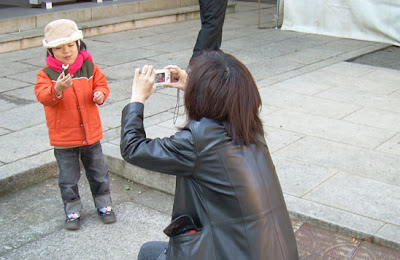 The Japanese government created a program that will pay parents 13,000 yen (about $140) a month for every child they have.* This money, which will come from taxes I pay, is meant to encourage the Japanese to have more kids by alleviating the burden on them financially. I have several problems with this point. First of all, 13,000 yen is a pittance. It is unlikely to encourage anyone who has chosen not to have kids to have them or someone with kids to have more. The money will simply augment the lifestyle choices of those who already have kids so that they can spend more on material possessions. Second, there are many people in the world already and plenty of them are ready, willing, and able to come to Japan to work, pay taxes, and do what Japanese people do. I don't agree with bribing the Japanese to make more people for the sake of making sure the gene pool stays exclusive. Finally, the problems with the birth rate aren't related to money as much as lifestyle. In particular, the oppressive amounts of overtime that people have to work (both men and women). This is not fixing the problem, but trying to deal with it obliquely.

I won't miss this sort of short-sighted, ineffective, wasteful, and frankly racially motivated choice to bribe people to have children.

*Note that there is no means testing so anyone, regardless of income (even wealthy families), will get this money for each child and the program that offers 13,000 yen per month in 2010 is supposed to be doubled to 26,000 yen (about $280) per month in 2011. If this were social welfare for poor folks, I'd be fine with that, but there's no income requirement to get this money.
Posted by Orchid64 at 12:15 AM