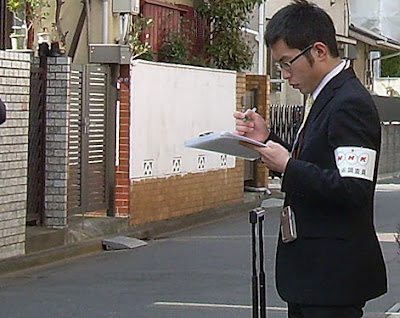 One of the things which I have had experience with since year one in Japan is NHK, Japan's public television network (like PBS, but with more channels) bugging me for money. The NHK guys (see armband on the fellow above) go door to door badgering you to pay them 2690 yen (about $30) per month for access to their channels. They say you have to pay it whether you watch their channels or not. Everyone who owns a T.V. is supposed to pay it. The thing is that I have been told repeatedly by Japanese folks who know the law that it's actually illegal to coerce people to pay this money, and at least some Japanese people refuse to pay it. However, most Japanese people "obey the rules" and give in and pay these fees.

I won't miss the NHK guy ringing my doorbell and bugging me for money to pay for programming I never watch.
Posted by Orchid64 at 12:15 AM