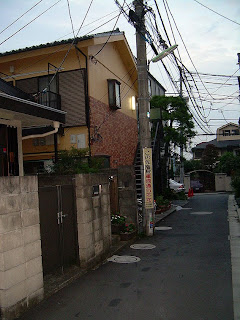 The yellow and fake brick building had our former apartment. The cement wall defines the edge of our neighbors home. Their front door was about a meter (about three feet) from the edge of the wall closest to us.

It should be noted before I indulge in this particular whinging session that I lived in Tokyo for the duration of my 23 years. I'm sure that living in other places would have afforded a different experience, but I can only speak from my own subjective state of mind. If I could break into someone else's head and steal their perspective... well, I wouldn't do that because I have enough trouble with my own version of reality... If I could, I'd probably have a different idea right now.

At any rate, my neighbors were right behind my living room double glass doors. Their front door was about eight feet (2.4 m.) from mine - literally. They also had a tendency to stand in front of their home and have long and loud conversations. It was, again, literally, like they were in the same house with me in terms of the volume and the sense of personal space.

Beyond the fact that they were fairly oblivious to the concept that you could invite someone into your home to have conversations or speak at a volume which didn't carry halfway across the block, they also complained to our landlord if we listened to music or T.V. too loudly for their delicate sensibilities. Apparently, it's okay to have bombastic chats with people, but not to watch "Star Wars" at relatively high volume in order to get the full aural effect. Finally, there was the smoking issue. With units being so small, most people smoked outside so as not to stink up their own places, so they stood on their balconies and it wafted downward to our window. In the U.S., houses tend to be far enough apart that this isn't quite as bad as it was in Tokyo.

I don't miss the experience of living in such close proximity to people that their habits can't help but interfere with my daily life.
Posted by Orchid64 at 8:00 AM