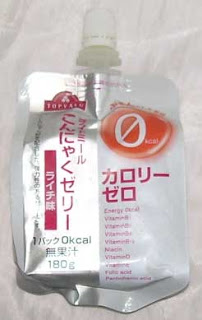 A foil packet of lychee konnyaku zero-calorie jelly drink meant to fill the space when you're dieting.
Part of Japanese cuisine is something called "konnyaku" (konjac). It's derived from a corm (similar to a potato, but not quite the same beast). You can often see konnyaku as a block of gray gelatin that has little black speckles on it. They float around in oden and are used in soups and stews. Frankly, I think they're like chewing on one of those pink erasers on pencils in that format. However, I do enjoy them as part of fruit "jellies", especially in their incarnation as an appetite suppressant in diet foods. Konnyaku is filling and the fiber is good for the digestion. If you're hungry and either can't or don't want to eat, you can consume any of a number of konnyaku jellies and they actually do satisfy you for a time, even in relatively small portions.

I'll miss konnyaku jelly/gelatin desserts.
Posted by Orchid64 at 12:15 AM