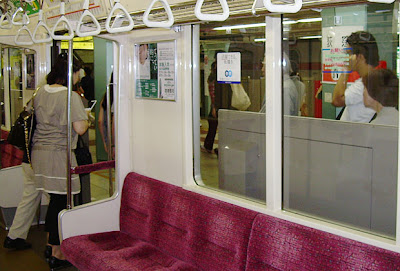 Perhaps this is normal behavior all over the world, but I never experienced this until I came to Tokyo. Very often when I'm waiting in line for the train to arrive, and there is one person at the head of the line in front of me, that person will not get on the train even when there is a break in the traffic flow of people disembarking. Any reasonable person would get on the train when the door was clear, but often that person at the head of the line seems to willfully stand there, knowing he (it's usually a man) will be the first one on and get a seat easily and that he is ensuring that others will not. When he finally does move, it's almost always at a snail's pace.  Essentially, he holds the rest of the people behind him back so they can't get on. This happens in other situations as well. If you are rushing to meet a train, and trying to get through a narrow space, some Japanese men will see you're in a hurry and intentionally try to stop you by blocking the stairs or whatever access-way you have.

I believe this is a power trip on the part of some Japanese men (and that they carry it out mainly when women are involved) and I won't miss this rude and unnecessary behavior.
Posted by Orchid64 at 12:15 AM