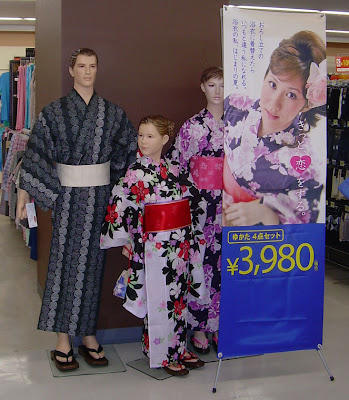 Mannequins that are clearly Western in appearance modeling Japanese yukata.
When I first arrived in Japan (about 20 years ago), there was something which I found peculiar, and that was the vastly disproportionate number of Western-looking models. In fact, the majority of ads (at least 80%) on trains showed people who look like they were from Europe (loads of blondes!). These days, it's not quite so skewed because the weak economic situation has priced foreign models beyond most companies budgets. Still, less than 2% of the population in Japan is non-Japanese, and only a fraction of that 2% is Western in appearance, yet you find that quite a lot models in ads, magazines, and even mannequins are not Asian-looking. The oddest ones are the ones who are modeling uniquely Japanese things, but clearly are not meant to look Japanese. Since the culture is homogeneous, and tends to be exclusive rather than integrative, this is a fascinating choice.

I'll miss this curious emphasis on foreigners to sell products when those products are targeted at the domestic market.
Posted by Orchid64 at 12:15 AM