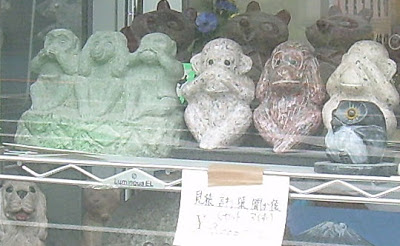 "Speak, Hear, and See No Evil" statues at a local stone-working shop. The Japanese believe they invented this concept, incidentally.
My brother-in-law likes to tell a classic anecdote from his early days in Japan which beautifully illustrates the mental wall that goes up between a Japanese person and a foreigner the minute the former lays eyes on the latter. He speaks Japanese well, particularly conversational Japanese and the types of phrases used in everyday life, so he doesn't try to speak English to people. One day, he got in a cab and in perfectly normal and correct Japanese (not weird, textbook Japanese), he told the driver where he would like to go. The driver turned around and says, "I no speaku Engrish."

Some Japanese people believe they can't communicate with you before you even open your mouth and don't even listen to what you say even when you speak to them in their own language, and I won't miss that.
Posted by Orchid64 at 12:15 AM