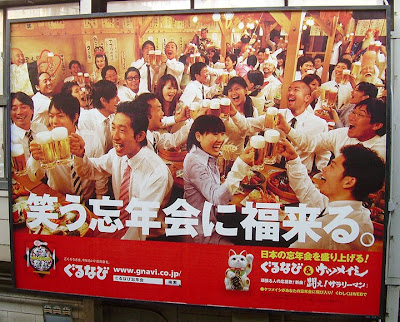 "Nomikai" means "drinking party" in Japanese. If you work, you will often be invited to such parties, and declining those invitations can have negative consequences on your relationship with your coworkers as well as your future promotion potential. The thinking behind nomikai is that Japanese people have to keep their true feelings under such tight wraps that they can only let some of them out when liberally lubricated with alcohol. It's meant to allow for a sort of communication that cannot be had in the office, but is integral to working relationships. In reality, it's often about the bosses dragging subordinates out for drunken revelry and holding their attention hostage. It also forces the subordinates to waste their money on food and drink when they would rather go home, be with their families, and take a bath.

I won't miss this tradition of expecting workers to go out to drink or suffer unfortunate career or professional relationship consequences.
Posted by Orchid64 at 12:15 AM