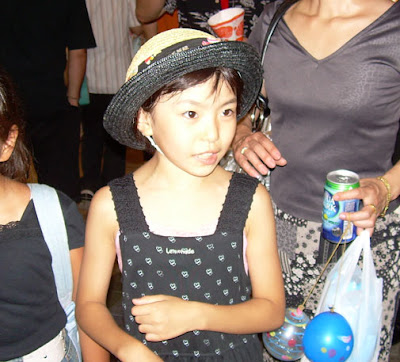 Okay, she's not Audrey Hepburn, but don't the hat and hair remind you of her style? And she is one cute little girl.
The first time I came to Japan in 1988, I didn't know much about the culture or people. Frankly, I came to Japan the first time to visit my future (American) husband who just so happened to be working here. I had much more interest in him than Japanese people or culture. While I was enduring the 14-hour-plain ride home after the best month of my life and sobbing that I had to leave the love of my life behind for another 3 months while he finished out his contract, I watched the movies being shown on the plane. One of those movies was "Roman Holiday". I couldn't understand why they were showing a movie made in 1953 and wondered why the airline was so cheap showing an antique movie. It turns out that they chose it because the Japanese are crazy for Audrey Hepburn. There are a lot of theories as to why the Japanese are so nuts for her, but most of the people I've asked and who talk about her on the internet say it is because of her beauty, style, charm, and elegance.

I will miss this curious fixation with this particular, arguably less than universally iconic, actress.
Posted by Orchid64 at 12:15 AM