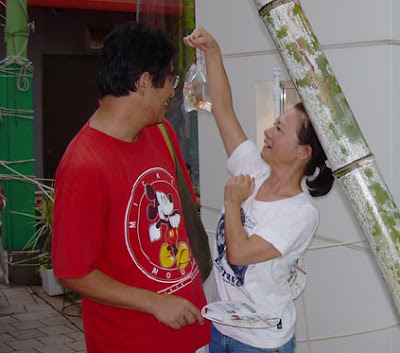 Japanese people grow up more slowly than Americans. It's hard to explain this without it coming out wrong and possibly sounding insulting (to either side), but I always have the sense that there are a lot of 12-year-olds going on 20 in the U.S.  There's a rush to be "mature" and prove you're "worldly" and capable of independence as early as possible, and young people have a particular attitude based on this need to prove one is no longer a child even when one clearly is a child. In Japan, this rush to maturity doesn't manifest itself so strongly in most people and they're good with holding on to aspects of their youth that we quickly wish to discard to "prove" our maturity. In fact, many of my Japanese acquaintances openly assert that they'd like to hang on to their childhood and ability to be dependent as long as possible. Here, it's sometimes a case of 30-years-old going on 13, but in a nice way. Perhaps this is fueled by the knowledge that life after leaving the education system is going to be decades of overworking and being tied to a corporate yoke.

People don't seem quite as afraid to be young and inexperienced, to show their naivete or child-like delight at child-like things, or to remain in a state of prolonged innocence, and I'll miss that.
Posted by Orchid64 at 12:15 AM