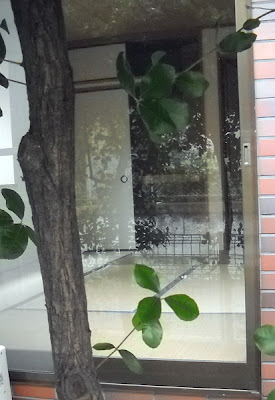 Yes, I was creepy and took a shot of someone's empty room through a window. To be fair to me and my quasi-peeping tom tendencies, this was an unoccupied room rather than one someone was actually living in. The things I do to get shots for my blogs...

There is a long-standing cultural habit in Japan of keeping one Japanese-style (tatami mat, low furniture, minimalist styling) room in their homes. This room usually has a tokonoma or special alcove which may include an altar for prayers related to ancestors or bits of art. Note that these rooms are not in apartments or condos, but only in houses. That being said, Japanese homes aren't exactly cavernous and huge. Sacrificing a room to this is puzzling, especially when other rooms are often piled high with junk and crammed to the gills while this one space remains pristine.

I'll miss the contradiction that is inherent in keeping one room impressively empty and clear while piling up other spaces with the debris of daily living.
Posted by Orchid64 at 12:15 AM