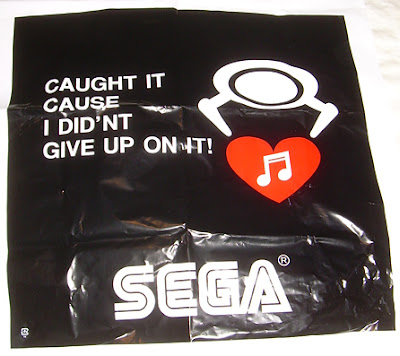 A UFO Catcher prize bag from a Sega game shop.
I can't believe I'm writing this post. Not a year ago, UFO Catchers (claw crane games) were something I wanted nothing to do with because I thought they were scams and you had to put a ton of money into them with little chance of getting a price. Some time around the end of 2010, my husband gave one a shot to win me a debu neko (fatty cat) and he found out that, while it requires skill, the machines aren't rigged to make it impossible or very costly to win. In fact, he won 3 prizes for 500 yen (6 tries). Buying the same prizes from Rakuten would have cost 1800 yen. Since then, he's been enjoying the games and we've learned a lot both about the games and the way the business operates in Japan. Most of the game shops want you to win. They really want you to win. They'll move things around to help you or put the prize you want in a better position if you try a few times and fail. At one game shop, the owner stood behind us and moved the prize every time my husband missed in an attempt to help us (which actually made it worse, but I appreciated the motivation).

I'll miss the UFO Catchers and how the experience at the game shops is so uniquely Japanese in the way in which staff will help you most of the time.
Posted by Orchid64 at 12:15 AM