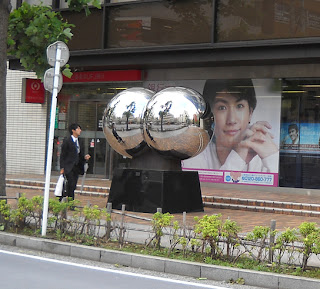 This is a MUFG (Mitsubishi UFJ Financial Group) building, which is very tentatively linked to this post. I'm using this picture because of the man and poster person staring in awe at the silver scrotum sculpture in front of the building, which is more interesting than a generic bank picture.

In the U.S., I was paid every two weeks and some people are paid every week. I think the system is set up in that fashion in order to compensate for the fact that most Americans are poor at budgeting and tend to spend all of the money they have on hand a bit too rapidly. Yeah, I know how that sounds like I'm bashing my home country, but it does reflect a culture in which many people often talk about "being broke until payday". Personally, I haven't had problems budgeting myself and I don't mind the fact that Japanese companies pay you once a month from that viewpoint. The problem for me isn't about being a spendthrift. It's about seeing the banks swamped on the 25th of the month (and the next few days for those who lag) and not being able to do any sort of simple transactions there if I happen to forget that it's close to payday or must do something necessary. Note that because I'm a foreigner and my money gets held onto longer by two of the three agencies that pay me for various jobs, I don't get paid on the 25th anyway, so it's not like I'm waiting for a deposit to withdraw money. Sometimes, things just come up and I need to go to the bank when everyone else gets paid.

I won't miss having to fight massive lines at the bank once a month because everyone else is getting paid at the same time once a month.
Posted by Orchid64 at 12:15 AM