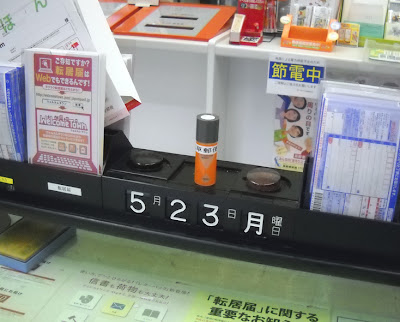 A counter with forms and a glue dispenser at a post office. They know you're going to need it.
Back when I first came to Japan, I wrote to a lot of folks back home, and this was before home computers were cheap and accessible for all, let alone e-mail being the norm. At that time, I had ample experience with the frustration of Japanese envelopes and I was reminded of that recently when sending something by snail mail. The envelopes here come in three flavors - flaps with no glue on them, flaps with glue on them, and those with peel off strips that reveal sticky goo and allow you to seal the envelope. The last type is the most expensive and not particularly common. The first is most common and the second, which are the type you usually buy in the U.S. and lick the dried glue to seal, turn out to be one of the worst purchases one can make if one lives in Tokyo. I found this out when I stored a box of Christmas cards with envelopes which I bought from home. By the next year, every single envelope had self-sealed because of exposure to summer humidity. It was at that point in time that I understood why most envelopes have no glue on them at all and require you to fussily mess with a glue stick to seal them up. Glue sticks aren't hard to use, but envelopes aren't the type of thing you can slather glue on willy-nilly. You have to place the flap on a piece of scrap paper because you have to apply glue up to the edge and only apply glue to the outermost part (or you will glue the flap to the letter inside).

I won't miss the annoyance of having my envelopes seal themselves or carefully applying glue to Japanese envelopes.
Posted by Orchid64 at 12:15 AM