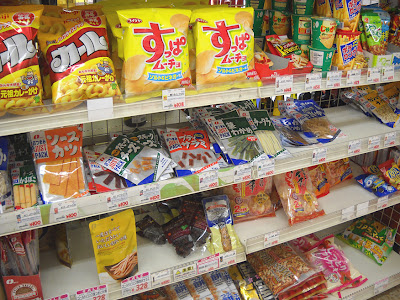 Delicious, salted fuel.
It's very easy to misunderstand the statements made in other cultures, and one thing that I often hear American dieters who have spent a short period of time in Japan smugly assert is that the Japanese stay trim by viewing "food as fuel". When a Western person says this, they think this is about minimizing the pleasure of food such that it is diminished to being mere sustenance. They think that the Japanese see food in this way as a means of avoiding the pitfalls of eating cakes, chocolates, and salty delights. Here's the thing: this is not what the Japanese mean when they say "food is fuel". There's a reason this country has entire shows devoted to the delights of food and that Tweeting about what one ate for lunch is so popular among the Japanese. There's a reason that they market "stamina" food full of fat and carbohydrates as if it were a good point. They adore food and are not reducing it down to being the mere gas they use to fuel their bodies. When they say, "food is fuel", they are talking about making sure they eat enough to keep their motor rolling, not eating as little as possible or forgetting that food is a source of great pleasure. It's about eating more, not eating less when the Japanese say "food is fuel".

The way in which the Japanese view food as fuel in a positive fashion is something I will definitely miss, particularly after I return to the U.S. where people have so many hang-ups and value judgements about what and how much they eat.
Posted by Orchid64 at 12:15 AM