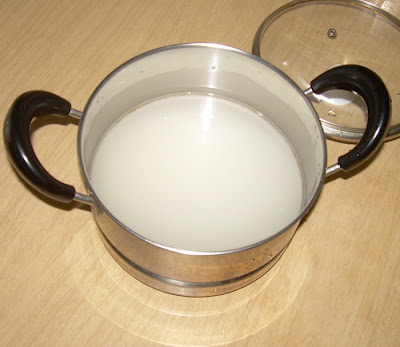 Somewhere under that cloudy water is my rice. That color is telling me my work is far from done. And, no, I don't use a rice cooker for something as simple as making rice.

One of my students lives and works in Tokyo, but her home town is in Miyazaki. I've never been there, but she tells me it is vast tracts of nothing, but she goes there because she's a wonderful person and a good daughter. When she visits, her mother always does a lot of cooking and doesn't ask anything of her daughter except that she wash the rice. The mother doesn't mind doing the plethora of repetitive tasks that come along with traditional Japanese cooking like making several different dishes from scratch or cutting things up into chopstick-accessible-size pieces, but she hates to wash the rice and I know how she feels. It's tedious, time-consuming, and ultimately a task which you can't do in any way which adds quality to the final dish. At least when you chop a vegetable, you don't do it the exact same way every single time and it doesn't take about 5 minutes of swirling, draining, and refilling with water.

It may seem like a small thing, but trust me when I say that after hundreds of experiences washing Japanese rice, you get pretty sick of it and I won't miss it.
Posted by Orchid64 at 12:15 AM