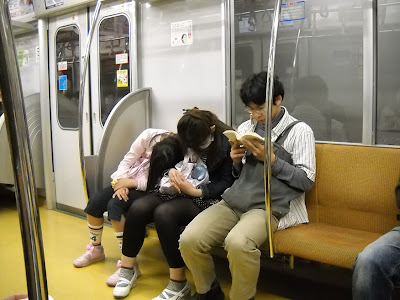 My former boss used to complain on a regular basis about something which happened to him every time when the train was crowded to sardine levels. That would mean this happened to him everyday during rush hour. Fortunately for me, it happens less often than that, but it still happens. When the train was extremely crowded, the people around him would simply stand without holding a strap and lean into him. They made little or no effort to support their own body weight when the train turned and just allowed their full weight to rest on him. This is one of the lazy and irritating things that happens on trains in Tokyo. The other thing that happens is that people who sit next to you will simply keel over and sleep on you.

I won't miss being a resting post for people who are inconsiderate, lazy, and rude.
Posted by Orchid64 at 12:15 AM