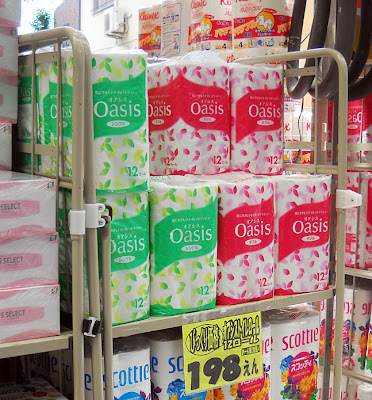 Going through the earthquake on March 11, 2011 and its aftermath is something I wouldn't have chosen to do, but it taught me some new things about Japan and the way the Japanese people operate. Some of those things were good and some not so good. Among the things I learned was that, when crisis hits, the Japanese go for the toilet paper. This wasn't the first time in Japan's recent history that people went bananas for something with which to wipe their behinds and hoarded it at the expense of others, and I'm pretty sure that it won't be the last. Because of the nuttiness about toilet paper which has occurred, I'm finding myself driven to stock up as soon as I open the last 12-pack. I wasn't like this before I found out what Japanese consumers do when they are in a state of crisis (and I'm not the only one who was changed in this manner). I don't like to live in a state of paranoia like this, but I really don't relish the alternative should I be caught short. I'd encourage anyone who tends to wait to stock up on essentials until they are nearly out to reconsider if you live in Japan. The supply line will be fixed, but people who lose their heads aren't so quickly righted and, at least this time, the hoarding didn't stop for at least 5 weeks.

I won't miss the paranoia I feel that if I don't keep ample toilet tissue stock around, I'll be stuck looking for leaves to wipe my behind with.
Posted by Orchid64 at 4:00 AM