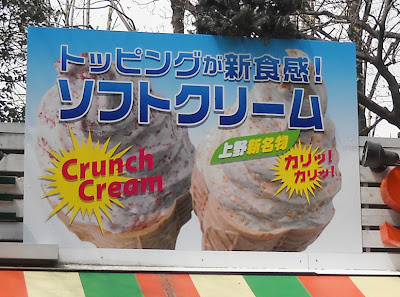 A lot of people talk out their asses about Japan. When I say that, I mean they assert something and offer a reason (often that elevates the Japanese people or cultural aspects above Western ones) which they have no real insight, understanding or evidence of. One of the things which consistently irks me is that people will say something about Japan is "better" when they have no evidence that the Japanese version is appreciably different from those in their home country. Well, I can tell you why Japanese soft cream is different than American soft serve ice cream. Through my work, I've had access to people who work at the corporate headquarters of various food and restaurant businesses including McDonald's Japan. I was told that the soft serve ice cream  in Japan is formulated to be creamier and less sweet because this suits Japanese tastes (which run toward a desire for more fat and less sugar). This lends it a sense of richness without cloying sweetness that overwhelms the flavors of the soft serve. So, when I say that Japanese soft serve (aka "soft cream") is different, I'm not just asserting something without a basis in fact.

I'll miss the richer, creamier soft serve ice cream in Japan.
Posted by Orchid64 at 4:00 AM