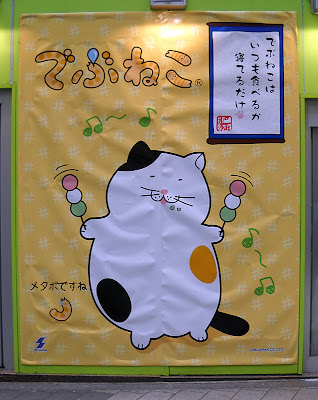 Debu neko may be Japanese, but calicos are not.
In the original Star Trek, the character of Chekov sometimes asserted that something was invented in Russia when it was not. As far as Chekov was concerned, all good things originated in Russia. The Japanese have something in common with that fictional character. They think that a lot of things are Japanese when they are not. My first introduction to this was when I was talking about calico cats during my first year in Japan. I was told by multiple people that they are a uniquely Japanese cat. I was told that cats with that number of mixed colors only existed in Japan. When I broke the news to them that I had a calico back home, and that such cats weren't rare there, I was given blank looks as if I was talking crazy talk.* Of course, the most infamous of these assertions is that Japan is the only country that has four distinct seasons.

This is not the only thing that Japanese people believe they invented or was originated in Japan, and I won't miss this tendency to lay claim to invention, unique origin, or culture which smells of arrogance and demonstrates ignorance.

*Note that calico cats are not a breed but a genetic roll of the dice. They are not unique to any particular country.
Posted by Orchid64 at 12:15 AM