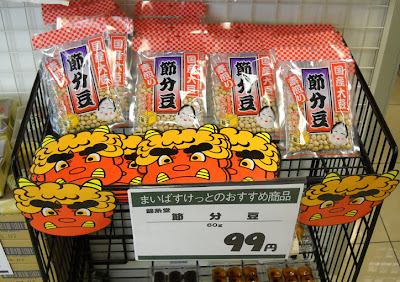 Most foreign folks tend to notice the big holidays (New Year's, Golden Week), and the transplanted ones like Christmas and Valentine's Day, the most. Setsubun is one of those holidays which foreigners rarely understand or pay attention to for a variety of reasons. One is that the Japanese don't talk about it much. This is because they don't get the day off and many will say it's not even a "holiday" (but it is in the same vein as St. Patrick's Day or Valentine's Day). Another is that it isn't glamorous, though you do often see displays of soybeans with masks related to it. Setsubun is February 3 and on that day many Japanese folks throw soybeans out the front door and tell the devil (oni) to go away and ask luck to come in. Walking along the street the next day, you'll see bits of crushed beans in the pavement from people who follow this tradition even though they don't believe the superstition behind it. I always enjoy asking my students about this holiday, because most don't have any idea where it came from and why it exists. Occasionally though, someone will impart a nugget of information and it's a delight to have another piece of the puzzle filled in.

I'll miss the uniquely Japanese nature of this holiday and how it is subtle and unimportant, yet so very often observed.
Posted by Orchid64 at 8:00 AM