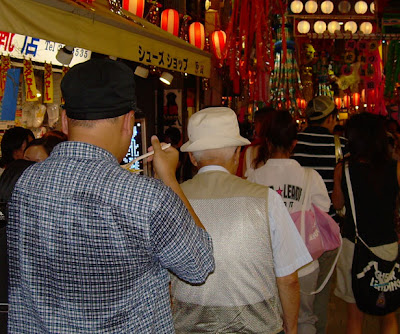 I realize there are people who stink everywhere in the world, but I encounter far more people with intense B.O. in Tokyo than I have anywhere else. The reason for this is that most Japanese assume they don't stink when they sweat and therefore do not need deodorant. In fact, many believe that only foreigners are capable of smelling bad when they sweat. There was once a sign near deodorant in a drug store which said essentially, "don't smell bad like a foreigner." Well, it's not only foreigners who can smell bad, especially in the hot humid summer, but even year-round. One of the workers at a local convenience store seems especially oblivious and I hate shopping there when he's on duty.

Men in particular seem to be unaware of the putrid funk they are subjecting bystanders to and I definitely won't miss the frequency with which I encounter these clueless stinky Petes.
Posted by Orchid64 at 8:00 AM