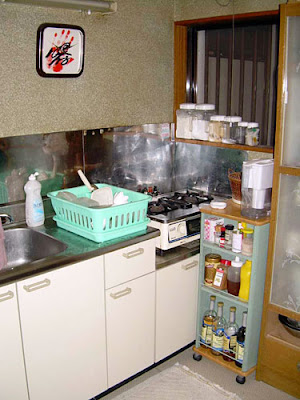 A lot of short-timers in Japan never really do much in the way of cooking. For them, a toaster oven and one lonely gas burner is more than enough to sustain them between "konbini" (convenience store) sandwiches and rice balls (onigiri) and dinners of UFO yakisoba and instant ramen. For me, as someone who cooks and cooks a lot, having a mere 2 burners on a gas table requires a lot of messing about to get the job done. It's not even about complex meals, but if you want to cook a vegetable, a starch and a main meat or fish dish, that's a three-burner deal right there. I'm not talking about multi-course haute cuisine, but just a basic meal with different components. Though I've become fairly good at juggling, it gets pretty tiresome and troublesome at times.

Some Japanese people have proper stoves (with 3 or 4 burners) in their homes, but most apartment dwellers are stuck with one or two burners. I won't miss the limits on meal preparation that have been a part of my life in Tokyo.
Posted by Orchid64 at 8:00 AM