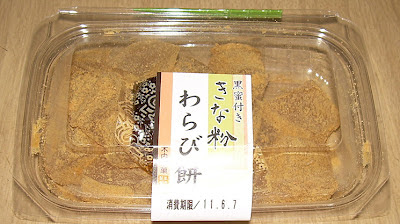 Many people write about the stages that foreigners go through when they come to Japan. Generally, they capture the flavor of what people go through, but are overly simplified and a generalization. Still, generalizations do have their place in helping provide a framework from which we can understand a situation better. For me, the food in Japan has followed a very odd pattern of approach. At first, I was wary and squeamish and never had the sort of open-minded notions that many newbies have. I stayed away from anything that looked "too Japanese". It's only really since starting my snack blog that I've become increasingly open to sampling everything in my wake. Part of the draw of blogging for me is that it does help me expand my horizons, and since my focus on food has been relatively narrow for so many years, I'm grateful that I started that blog.

"That Japanese stuff" which I avoided would include things like warabi mochi. It appears to be little gooey blobs packed in dirty with a packet of soy sauce. What it really is relatively tasteless chewy jelly-like bits of gelatin made from bracken starch that can range from bland to highly sweet. If you think that sounds unappetizing, remember that Western-made gelatin is made from bones and hooves and Japanese agar-agar gelatin is made from seaweed. Bracken starch doesn't sound so bad, then, does it? The gelatin is coated in kinako (toasted soybean powder) and offered with a packet of black (brown) sugar syrup. It's a texture and flavor treat with good depth of flavor from the various components.

I came by eating warabi mochi late in the game, but now I'm such a fan that I actually crave it from time to time. I'll miss having easy access to copious amounts of the fresh stuff.
Posted by Orchid64 at 8:00 AM