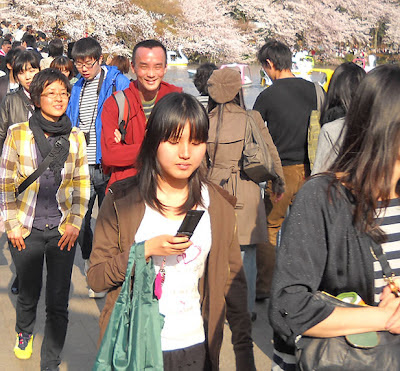 There was a psychology study done on a boy dubbed "little Albert" in which a loud noise was played each time he was shown a white rat. After awhile, he started to turn away and scream when he saw the rat. Later, he generalized his fear of the rat (which was generated by the loud noise) to all white things. If I had remained in Japan long enough, there is a good chance that I'd have my own "little Albert" experience and develop a fear of all phones considering the association of cell phone alarms indicating that a quake is coming and a particular tone. You're peacefully sitting on a train commuting to work and suddenly a symphony of cell phones goes off and everyone reaches into their pocket like a gun slinger doing his fastest draw in a duel. It not only scares the hell out of me because it's so sudden and all around, but because there's an association with the many aftershocks in the year that followed the March 11, 2011 Tohoku quake.

I won't miss hearing these earthquake cell phone alarms.
Posted by Orchid64 at 8:00 AM