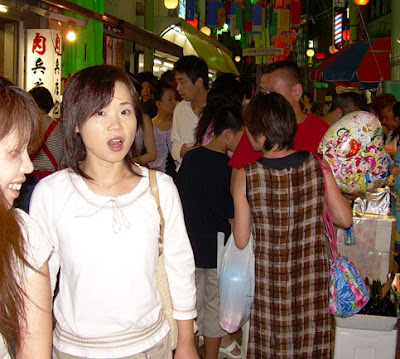 This lovely lady at a local festival did not say "wao", but she did have the right expression to convey the idea. Please do not believe I am lumping her in with the rude people I describe below. I'm sure she's a model of politeness and grace.

Let me begin by saying that "wao" (wah-oh) is what the Japanese see the English exclamation "wow" as. You see it written as "wao", but sometimes "wow", but it is almost always spoken as "wah-oh". It is the latter with which I take exception. Perhaps because of my stunning countenance, Japanese people will occasionally look at me and loudly utter "wao" in my direction. This angers me more than its nearest Japanese equivalent, "sugoi". Both are rude, but saying it in Japanese is somewhat more excusable since it may be a shocked utterance at the sight of an obviously non-Japanese person and the offender may believe that their words will not be understood. The use of "wao" is several steps closer to intentional rudeness as the choice of "English" is meant to make sure that I understand they are shocked at my presence.

I won't miss hearing idiots exclaim "wao" when they see me.
Posted by Orchid64 at 8:00 AM