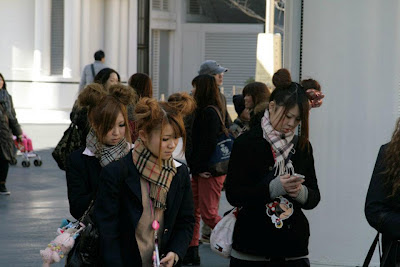 I'm sure these three school girls with the Mickey Mouse hairdos are an exception to the non-critical-thinking rule.

All education systems are means to an end. The culture decides what that end is. I'm going to admit to being ethnocentric in this post and say that I believe the goals of education are to produce people who are literate, generally knowledgeable, and capable of critical thinking. The Japanese education system fails miserably on that last item (though it succeeds wildly on literacy) because it focuses on rote memorization and test scores. Passing the tests becomes the end, not a means to an end, and students slave away to cram facts into their heads, pass tests, and then simply forget what they learned. By and large, this system creates people with linear thinking who hate the idea of "education" or study as they associate it with exhaustive memorization sessions rather than interesting discussions with diverse answers. Teaching students for many years in Japan has shown amply that most people are so rigid that they are focused on finding one "right" answer to every question and squirm uncomfortably with an answer which includes many possible correct options because this was their experience throughout their years of schooling. What is more, the system produces an unproductive teaching environment in which teachers are pressured to pass students on tests at any cost rather than focus on what is actually being learned.*

I won't miss the education system and the way in which it fails the Japanese people.

*On multiple occasions, I've heard complaints from teachers who had to dumb down tests so that the weakest student could pass because every student had to pass. Whether or not they mastered the desired information wasn't the issue.
Posted by Orchid64 at 8:00 AM