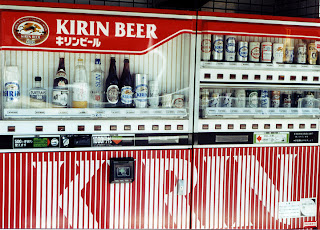 One of the first things Americans are surprised at when it comes to vending machines in Japan is the fact that alcoholic beverages are available in them. The reason this is surprising is that anyone, including underage drinkers, can sneak up to one, buy some booze, and run off and get loaded. Most of these machines are within view of a store, but some of them are not. Even those that can be seen from a store aren't exactly watched with the keenness of a hawk. Most of them are "set and forget".

It was my experience that kids were introduced to alcohol by their parents slowly and few of them viewed imbibing it as taboo. Since drinking is a very strong part of Japanese culture, it is expected that children will grow up to drink alcohol, not that they will abstain nor that it would be considered virtuous to do so. In fact, consumption of alcoholic beverages is so much a part of business culture, that not being a drinker is a disadvantage and definitely makes one the nail that sticks out. So, I don't think anyone was really fretting about kids getting their drunk on as a result of these machines being present.

This machine is a 1987 machine and the main difference between it and current machines is the size and the price. The interesting thing about the price is that it seems to have gone down just a tiny bit. And when I say the "size" is different, I don't mean the cans themselves. There have always been enormous cans and bottles of beer on offer. I am talking about the size of these vending machines. This machine is bigger than most current ones. What is more, they were once much more common than than they are at present in Japan.

The reason for both the minor price reduction and the shrinking size and frequency of machines selling booze was that the law changed at some point during my stay in Japan and convenience stores and markets were allowed to carry it. With "konbini" that are open 24 hours and located on  nearly every corner in Tokyo, anyone wanting to get pie-eyed could just pick up a brew with a pack of dried squid with cheese by popping into a shop. The demand for such machines evaporated when the availability of alcoholic drinks increased.

It's worth noting that the number of liquor stores also has shrunk, at least it seemed so to me when I was there. This is an interesting change in Japan because it was a rare case of the number of vending machines going down rather than up. The trend has been toward greater mechanization, not less. For example, for much of my 23 years in Tokyo, kiosks were small manned shops on station platforms. By the time I had gone, many of them had been replaced by large vending machines. For beer, the vending machines have been disappearing in favor of manned shops selling them. Of course, this has more to do with the fact that Japan hasn't yet mastered the art of the total self-serve supermarket or convenience store. Give them a few more years and an even more shrunken population and I'm sure they'll get there.
Posted by Orchid64 at 8:00 AM