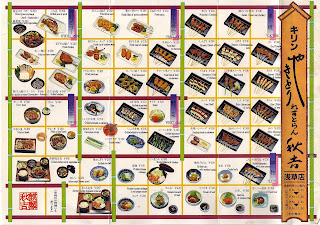 Click this photo to load a larger version which is legible.  (You may need to open link in new tab/window and magnify to load the full size which can be read.)

People may assume that business decisions are made rationally and in the best interests of furthering ones economic interests. In my experience in Japan, they were not made so much in accord with what was logical as what was perceived to be economically feasible, what related to the "rules" of doing business in Japan, and what suited the whims of the powers that be. In my opinion, the menu that I scanned in is an example of both the first and last items.

This menu was from one of my favorite restaurants/pubs in Japan, Akiyoshi. In the late 80's, they had full color bilingual menus. This made them a doubly awesome place for foreigners to congregate at that time since it was one of the few places at which those who weren't capable of reading Japanese could order things like pig intestines and beef stomach and know just how disgusting the food they were eating really was. If you steered clear of the offal though, you could derive greatness of experience from the more palatable options. I was always a huge fan of their chicken box (tori ju) and miso soup.

If you were to visit one of Akiyoshi's branches now, you would find that, not only are the menus only in Japanese, but there are no disposable menus like this. These days, the customer cannot walk away with a nifty souvenir such as this. There are plastic-covered menus that sit on the counter or table that you can order from, but are clearly meant to remain there for the duration.

This change in menu choices is a curious and telling one. Japan has become a much more bilingual place in the past 20 or so years. It has also seen more foreigners choose to live and work there relative to the late 80's. One of the reasons that Japan was once seen as a good place for foreigners to find work was that there were few enough of them around that it was very easy to get a good job and the pay was relatively attractive. In other words, demand for English-speaking employees exceeded supply. Now, demand does not so greatly outstrip supply so the pay has gone down, working conditions have gotten less appealing, and work is harder to come by.

Given that there are more foreigners who could benefit from bilingual menus around now than when this menu was on offer, why would Akiyoshi discontinue offering them? It would seem that the chance to lure in foreign customers would be greater now than before. I believe the answer is pure economics. In the 80s, there was a lot of cash being thrown around by companies, often on pet projects, frivolous high profile items and property, and poorly thought out business ventures. Chances are that this menu existed because someone high up in the company wanted to put forth an image of a business which could cater to foreigners, not because they actually wanted to lure in more English-speaking business.

When I worked at a Japanese company, especially in the earlier days before the company felt the deep and long-lasting sting of economic decline, the president used to make a wide variety of idiosyncratic and wasteful spending choices. They bought vacation property which was supposedly for company employees to take their holidays at, took company trips to Hawaii, and offered lavish plastic boxes to contain their correspondence course "kit" (cassette tape, homework booklets, textbook). These choices were made instead of upgrading the publishing section from hand-made layouts with glue and rulers to digital publishing because those were options the president wanted. He did not care about upgrading the product or improving its quality. He spent money on what he cared about, not what was good for business.

I can't say for sure if Akiyoshi made the choice to offer bilingual menus for the same idiosyncratic reasons that my company's former president made his. I can say that it would not be the least bit surprising if they did. In my experience in Japan, it was common during the bubble economy years for many companies there to make such choices for arbitrary reasons. It's why Japanese companies were going around buying expensive art and high profile properties right and left. They splashed out because of how it made them look and feel, not how it affected their bottom line.
Posted by Orchid64 at 8:00 AM