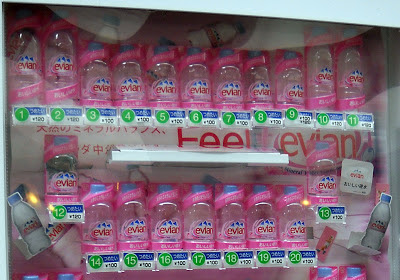 I didn't buy any of this, but I'm guessing it feels wet. (This machine was stocked a few months after the March 11, 2011 earthquake, when people were terrified of drinking tap water but the bottled water shortage had eased off.)

Japan is known the world over for its copious and odd vending machines. The neighborhood that I lived in in Japan, Asagaya, at one point had a vending machine full of marital aids including fake vulvas. That was quite awhile back, before I had a digital camera, and I sincerely wish I'd taken a picture of it when it was around. It was absolutely on the fringe of weirdness, and that's saying something for a country that sells bread in a can and condoms in street accessible vending machines.

There are vending machines here at home, of course. They are huge monolithic and sleek drink machines as well as beat up and vandalized newspaper ones. Other than that, it's a bit of a wasteland and what little there is, is far less interesting and variable than what I saw in Tokyo.

I truly do miss the weird vending machines, but I actually miss even the more mundane ones like the drink machines which carried a greater variety of beverages and rotated out the options much more frequently than those I have seen here.
Posted by Orchid64 at 8:00 AM