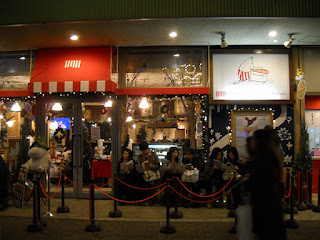 Last night, my husband and I were walking around a street (in California) that is known for putting up elaborate Christmas displays. When we were finished looking at the beautiful displays in front of people's homes, I remarked to my husband that I was looking forward to the holiday displays living beyond the 25th. In Tokyo, every little sign of Christmas tended to vanish by midnight on December 25th. In the U.S., at least in the past, such things tended to live on until New Year's (sometimes beyond). The way in which such things instantly disappeared in Tokyo always made me a little depressed. The holiday feeling felt as it it was washed away the minute it had lived its commercial course. Note that this was not the case with New Year's decorations. They tended to hang around for quite some time, as would be expected for a holiday that the Japanese themselves had an emotional investment in as their biggest celebration. I certainly don't "blame" them for that at all, but it did make me sad.

The way in which all vestiges of the holiday vanished by daybreak on the December 26 underscored how unimportant the holiday was for the Japanese and reminded me of my cultural isolation and I won't miss that.

I hope all of my readers are having a happy holiday season, and that they leave their trees up until New Years. ;-)
Posted by Orchid64 at 8:00 AM