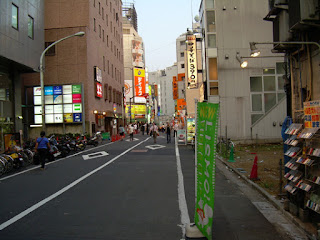 When I originally posted about how ugly Tokyo generally is, someone asked where I took the picture used in that original post. They could not believe that was a typical part of the city and thought that neighborhood had to reflect some sort of older, more impoverished time period in Tokyo's history. The truth is that much of the city areas are not pretty. My picture was not a misrepresentation. All of the lovely ones showing the best parts only were the skewed view. It's as if someone made a huge bunch of cookies, decorated them all badly but one and took a picture only of the one that looked good. Sure, there are gorgeous parts of Japan, but they are eclipsed in number by the range of ugly to blah areas if you are looking at the frequency.

That being said, now that I'm back home, I'm mainly struck by the suburban and rural ugliness of where I am/have been. Things look and feel very bland to me, even when they are relatively "nice" objectively speaking. Driving along in a car, it tends to just feel like things are tedious or rundown. Even when it was ugly in Tokyo, it wasn't boring.

It turns out that the ugliness, which was very real, is something I could forgive in exchange for the fact that there was so much of interest contained behind those grey, boxy facades. The surface now seems far less important than the substance beneath it.
Posted by Orchid64 at 8:00 AM