The first movie I ever saw in a theater in my life was "Snow White and the Three Stooges". Lest anyone believe that I'm old enough for a first run of that movie, let me saw that it was pretty antiquated even when I was a child. I don't recall how old I was, only that my aunt took me to it and that I had not yet started first grade.

The first movie that I saw in Japan was Wall Street, which actually was new to Japan and is a reflection of how old I am. The movie was released in the U.S. in 1987, but I saw it in 1988 because back in those days, it wasn't unusual for movies to take quite some time to make their way across the water. I'm pretty sure the delay in those days had to do with the speed with which things could be translated and subtitled, a process which I'm certain is greatly accelerated by modern technology as well as an incentive to synchronize release dates internationally so that the pirated versions aren't passed around from the earlier release in the U.S.

I also found the advertising on the back, which includes an ad for an extremely expensive air conditioner (218,000 yen/2,660 dollars), rather interesting. It is described as a "powerful city air conditioner". I guess that one of those wimpy country ones would be more economical. It seems an odd thing to market on the back of a movie ticket as it seems few people who were spending their spare cash on a movie would be thinking about super expensive air conditioners. Then again, most movie theaters were very hot at that time and this was one of the reasons I rarely went to them while I was in Japan. Perhaps after cooking your way through Charlie Sheen and Michael Douglas attempting to accumulate as much wealth as possible, you'd think investing in a "city air conditioner" was a pretty good idea. 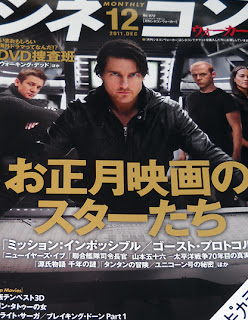 Incidentally, Wall Street was the first movie I saw in Japan and the last was Mission Impossible 4. I saw it a few days before going into the hospital to have thyroid surgery as a way of getting out and doing something relatively "different" from the usual routine before someone took a knife to my throat. I recall that the experiences were quite different. During Wall Street, there were these seats in prime locations with white covers on them which were expensive reserve seats and the theater was overheated. The theater at which I saw Mission Impossible 4 had enormous comfortable chairs  that looked like they came out of a space shuttle and pretty much there were no bad seats (there may not even have been reserve ones) and we had boring tickets printed from a machine. It was also cool enough that I could keep my sweater on, but, then again, we were in the midst of setsuden (energy conservation) and they were probably reluctant to use the heat so much in winter.

I can't say that seeing a movie these days in Japan is an enormously different experience from that in the U.S., except for the part where people aren't as obnoxious. I can say that in the late 80's, it sure felt rather different than it did back home. It felt more formal with those special reserved seats and the colorful printed tickets. I don't remember the move Wall Street at all, but I do remember the atmosphere in that theater.
Posted by Orchid64 at 8:00 AM