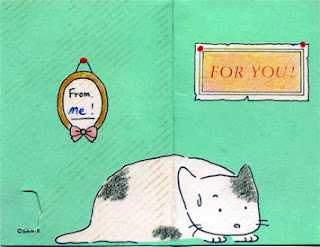 I'm not sure why the cat is the one sweating here, or why it is on a gift tag doing so.

It may be hard for people who have been to Japan to understand just how much it has changed in a short time. Sometimes, frankly, I find it difficult to believe or accurately remember. Fortunately, my 1987-88 books of memories are there to shake the cobwebs out of ancient memories and to remind me that Christmas as it is now is not as it has always been. 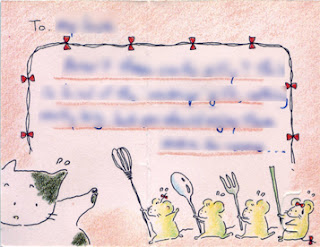 I guess the joke is that the cat is afraid the mice are going to eat it. Someone is unclear on the exact relationship between mice and cats.

For starters, during the first year I actually lived in Japan (in 1989), it was very difficult to find much of anything in the way of Christmas cards or decorations, and what I did find was expensive. The commercial potential of this Western holiday was not being tapped because it wasn't really being celebrated much at all. Students who were children during that time told me that they got one gift placed near their futon. That was the extent of things for them. There wasn't a lot of Christmas partying and the old KFC route of celebrating was not yet in the cultural mainstream (if it existed at all). The girl is saying something like "how terrible" as she looks in the box, as someone appears to have abandoned this cat near the trash.

In 1987, when my boyfriend and future husband and I were spending our first Christmas "together" 3000 miles apart, he sent me 5 enormous packages with a great many more presents inside of them. He couldn't find any appropriate Christmas themed tags or paper, so he bought these tiny little cards with Japanese written on them which he could not understand at all. He chose them based on the fact that I loved cats and cats were on them. 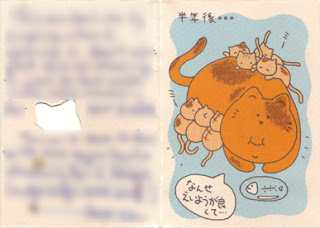 The messages my husband wrote me are blurred, because my mush is none of your business. ;-)

Now that we understand enough Japanese to know what the cards are saying, the stories and themes on some of them seem a bit strange for gifts. Perhaps they are jokes that language understanding alone will not help me "get". Perhaps it is something about Japanese sensibilities that escapes me despite my many years in the country (certainly a possibility). Or, maybe the fact that these are "present for you" cards and the illustrations and the stories they tell are utterly unrelated. The intent may be to entertain the receiver, not to necessarily convey a message. 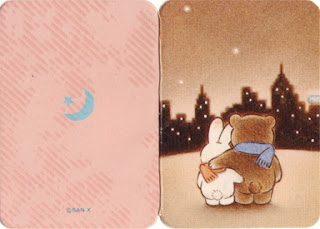 So, the first Christmas gifts I ever got from Japan were uniquely Japanese in every conceivable way and did not even reflect the spirit of the season. They did, however, reflect a unique mentality and a time when Western culture hadn't encroached quite so deeply into Japanese culture. The lack of unique Christmas items at one point made me sad, but now, I think the memories are all the better for it.

Happy holidays to all of my readers!
Posted by Orchid64 at 8:00 AM